Nathaniel Jenkins: Another brick in the wall of liberty


If you’re the slightest bit familiar with my blog, William and Mary Dyer, you know that Mary Dyer laid down her life for the cause of religious liberty, or “liberty of conscience,” as it was called. Her husband William Dyer, the first attorney general in North America, was one of the founders of Portsmouth and Newport, Rhode Island, which group stated, in contrast with the other colonies’ theocracies, that they were a secular democracy (religion and government were separated). William was active in the Rhode Island legislature and was instrumental in the groundbreaking 1663 charter of liberties granted by King Charles II, that allowed the separation of church and state, and the freedom to do what the conscience dictated in religious matters. That was the very beginning of the human right that would be codified in the great First Amendment to the United States Constitution, 130 years later.

I was researching ancestors in New Jersey. I knew that they had been Baptists living north of Salem, Massachusetts. That area, the place where Massachusetts Gov. John Endecott lived, was inhabited by the most extreme fundamentalist Puritans, who had tried to suffocate some Quakers and tried to sell others into slavery. They’d imprisoned and severely whipped Quakers, too.
But before the Quakers, there were Baptists. In 1651, the good Christians of Massachusetts imprisoned three Baptists from Newport who had gone up to Lynn (five miles south of Salem) to administer Communion to an old, blind man, William Witter, who had become a Baptist. After a trial, Dr. John Clarke was fined £20 (a huge amount of money), Obadiah Holmes £30, and William Crandall £5. If they refused to pay the fine, they would be whipped, a stripe for a pound. They refused to pay. Clarke and Crandall were released on the way to their flogging because sympathetic onlookers took up a collection and paid their exorbitant fines and hustled them away as they protested, but Obadiah Holmes refused to allow a fine to be paid for him. He wanted the vicious hatred of the persecutors to be shown to the Puritan colonists.
The scourge had three branches of hard leather, so that the 30 strokes left 90 gashes—and hideous scars for a lifetime. It was laid on so hard that the people begged the executioner to stop, worried that he’d kill Holmes. As his blood sprayed, Holmes said, ‘Though my flesh should fail, yet God will not fail: so it pleased the Lord to come in, and fill my heart and tongue as a vessel full, and with audible voice I break forth, praying the Lord not to lay this sin to their charge, and telling the people I found He did not fail me, and therefore now I should trust Him forever who failed me not.’ Afterward, when the pain did set in and he was recovering, Holmes insisted that his flogging felt like it had been done with roses, and that he bore the marks of the Lord Jesus.
In 1651, after John Clarke went to London to act as Rhode Island’s agent (and procure a new charter for the colony), Holmes became the pastor of the Newport Baptists.

***************
I had families of Ayers, Bowens, and others who had emigrated from Wiltshire and south Wales, to Salem and Ipswich, presumably as Puritans during the Great Migration. One of the Ayers women had a brother who was an officer at Mary Dyer’s execution in Boston.
But after some time, they became Baptists (perhaps as a result of seeing persecution unleashed on their neighbors), and moved temporarily to the Massachusetts-Rhode Island border at Swansea, before leaving there in 1687 to found Bowentown, New Jersey. They formed a Baptist church at Cohansey, and when a number of them, including the Irish Baptist immigrant, John Swinney, became Sabbatarians in the 1710s, they formed the Shiloh Seventh Day Baptist Church a few miles away. One of their ministers, who seemed (according to my research) to serve both the Saturday and Sunday churches, was a Welshman named Rev. Nathaniel Jenkins.
Nathaniel Jenkins was born and baptized (meaning his parents were not Baptist because Baptists believed in the choice to be baptized after the age of accountability) in Llangwyryfon, a tiny farming village near Aberystwyth, Wales.
He would have become a Baptist as a child or young man and studied theology in Wales or England. And he would have been exceptionally bright, to be able to be sponsored for university fees--certainly parents in a tiny farm village (still tiny even to this day) would not have had the means.
He married Esther Jones, and they had several children before emigrating to New Jersey in 1710. He served as a Baptist minister in the First Baptist Church for 18 years at the fishing and whaling community of Cape May, NJ.
During that time, he served as a Trustee in the Loan Office and was elected as a member of the colonial Council, which was equivalent to today’s state legislature. In 1721, a bill was introduced in the assembly,

"to punish such as denied the doctrine of the Trinity, the Divinity of Christ and the Inspiration of the Scriptures."

(This appears to be related to Baptist groups and the Unitarian movement in England, holding a doctrinal conference called the Salter’s Hall Controversy in 1719.)
But Nathaniel Jenkins, highly educated and respected Baptist minister that he was, boldly spoke against the bill. The Welshman stood on the platform of "soul liberty," which was another term for “liberty of conscience” or religious liberty, granted to Rhode Island in 1663 by King Charles II, after the work of Mary and William Dyer, Rev. Roger Williams, many who had been persecuted in Massachusetts, and (wait for it!) Rev. John Clarke and Obadiah Holmes (the Baptist who was whipped). In fact, Obadiah Holmes’ son, by the same name and also a Baptist minister, had moved from Newport to New Jersey and was well known to the New Jersey Baptists.
In the assembly, Nathaniel Jenkins declared that


“although I believe these doctrines as firmly as the warmest advocate of the bill, yet I would never consent to oppose those who rejected them with law or with any other weapon than argument.”

Jenkins said his theology actually was similar to the bill's sponsor, so it might have helped his town and congregation to outlaw dissenters like those in the Unitarian movement. But he recognized the injustice of enforcing  religious thought and behavior through the government. Government-plus-religion always results in oppression. Whether it was his reference to the religious liberty struggles in the American colonies, the justice and logic of his statement, or his standing in the community, the bill was accordingly quashed. Voted down. Dead legislation. Not going to happen. Thanks to the testimony of the saints who'd gone before, and thanks to the principles of Nathaniel Jenkins.
Did I mention I love history? Soul liberty is in my blood!
During his pastorate at Cape May, branches of the Baptist church were established at Salem, Pittsgrove, and Great Egg Harbor. Jenkins spoke at a number of Baptist churches in Pennsylvania and New Jersey in the 1720s, and was called to Cohansey and Shiloh on a permanent basis in 1728, and remained their minister for 25 years.
One of his sons was also named Nathaniel, and the son took over the pastorate of the Cape May church for a short time when his father was called inland. But the son was an alcoholic, dismissed from the pulpit, and died in his fifties.
The Bowens, Swinneys, and Ayers families stayed in the same church for decades, and siblings of one family married siblings of the other family, so that my pedigree repeats itself a bit in the 1700s. There was no consanguinity, however. The Swinneys moved west to Indiana and eventually Iowa. They remained Seventh-day Baptists for 200 years.
While researching something else, I found a mention of Nathaniel Jenkins, where he and other Welsh Baptists wanted to investigate a legend they'd heard about a Welsh prince discovering America in 1170. I wrote about it HERE. 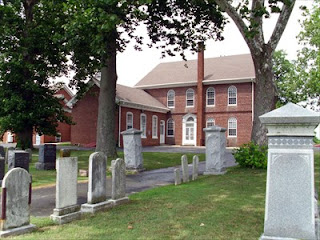 Rev. Jenkins died August 2, 1754, in the 77th year of his age, still a minister, and is buried in the Baptist graveyard at Cohansey, Shepperd's Mill, New Jersey.


In this second house the church continued to worship during the pastorate of Mr. BROOKS [also my ancestor!], who died in 1716 in his 55th year and that of his successors, Rev. William BUTCHER, who became pastor in 1721 and died in the service December 12th 1724 aged 27. During the pastorate of his successors, Rev. Nathaniel JENKINS who in 1730 removed to Cohansey from the first Cape May church, the third meetinghouse was built on the same site in 1741. It was a frame one 36 by 32 feet in size and Morgan EDWARDS in 1789 wrote: The house is finished as usual, and is accommodated with a stove, something not usual in that time, the small foot-stoves filled with hot coals, brought by the worshippers, being in that day the only way of counteracting the cold most meetinghouses.
In this house Mr. JENKINS finished his labors on earth, dying June 2nd, 1754 aged 76. Rev. Robert KELSEY succeeded him in 1756 and spent his life ministering to the people from this pulpit, dying May 30th 1789, aged 78 years. Source: Cohansey Baptist Church history. They are incorrect about Rev. Jenkins dying in June because the calendar convention at the time was "the second day of sixth month," on the Julian calendar which began in March--so the death date should be 2 August 1754.


My parents visited the Cohansey and Shiloh locations in the spring of 1976, and made acquaintance with distant cousins who still lived there, still Seventh-day Baptists. Nathaniel Jenkins was my 7th-great-grandfather.

*****
See comments on http://baptistnews.com/culture/social-issues/item/30066-critics-say-national-day-of-prayer-divides-americans-by-faith
You may think that a national day of prayer, a Ten Commandments plaque at the courthouse, prayer in schools or council meetings, or mandatory closures on Sunday as advocated by the government are small things. But they are the camel's head in the tent. Soon, the tent will be full of camel, and you’ll be out in the swirling sand storm. If the lobbyists and “morals police” win on one point, they’ll keep coming at us with more.

People died in this country and elsewhere, for the right to keep government separate from religion, and still allow the freedom to worship God as you feel called. Don't trample their blood in your eagerness to wave your Bible and feel patriotic and evangelical. I hope you use the link at the top of the article to read about Mary Dyer and her death for religious liberty.


Christy K Robinson is author of the books: 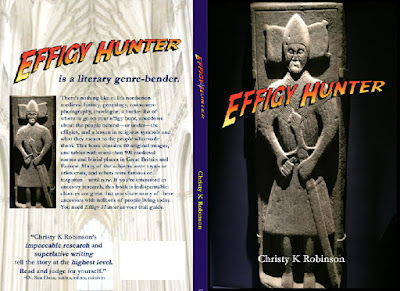 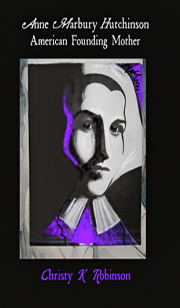 Have you read this 5-star book? Click the image.

Click image for links to paperback and Kindle editions!

Other sites by Christy K Robinson

Christy K Robinson
Christy K Robinson is an author and editor whose biographical novels and nonfiction book on William and Mary Dyer were published in 2013 and 2014. Her hardcover book We Shall Be Changed is also available. In September 2015 she published Effigy Hunter, a nonfiction history and travel guide, and followed that with a contemporary biography on Anne Hutchinson.